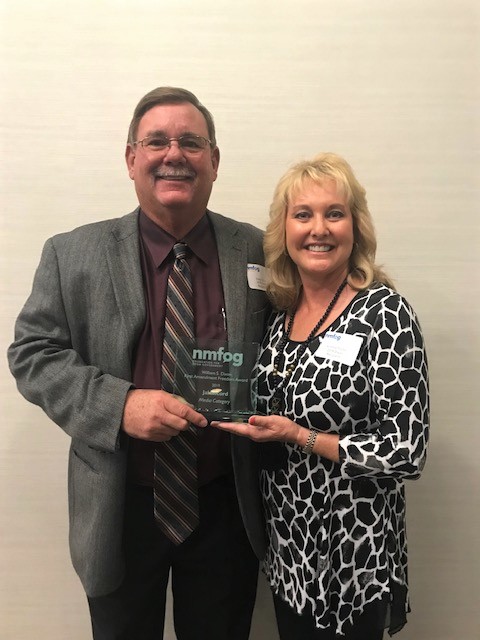 On August 5th, 2019, The Jal Record, owned by Gregg & Kim Fulfer, was selected by the New Mexico Foundation for Open Government (NMFOG)  as one of six New Mexicans and one news organization to receive the 2019 William S. Dixon First Amendment Award.  This honor recognizes outstanding accomplishments of citizens and organizations in New Mexico who champion transparency and defend the people’s right to know the affairs of government. “Open government is good government, visible and accountable to all of its constituents and responsive to their needs,” Kathi Bearden, Dixon Award chair, said in announcing the nominations.  “Every one of us has a stake in the staunch defense of free speech and open government. NMFOG is proud and privileged to honor these guardians.” These individuals and organization were honored Wednesday, October 2nd, at the Marriott Hotel in Albuquerque, NM

Other recipients include Mike Gallagher of the Albuquerque Journal; Larry Barker of KRQE TV 13; Nancy Henry, citizen journalist and watchdog; State Senator Daniel Ivey Soto who has worked to increase transparency and enforce accountability; Keith Manes, Lea County Clerk who, immediately after taking the office, made accessibility of public records in Lea County his top priority; and Tom Scharmen, regional epidemiologist for the State Department of Health.

In honoring the Jal Record, NMFOG stated that “The Jal Record successfully fought the City of Jal, which refused to release records in what the Attorney General called a “flagrant violation of the Inspection of Public Records Act.”  The paper settled with the City of Jal and city officials admitted there was “no excuse for the City’s wholesale violation of IPRA.”  Most significantly, Jal agreed to pay $407,471.25 to settle the newspaper’s claims – one of the largest such settlements in state history.  It serves as a strong reminder to local governments that they can be held accountable for violating the state’s Sunshine Laws – and that such action can have severe financial repercussions.”

Lea County Clerk Keith Manes, who was another Lea Countian recognized, took over the clerk position in 2016.  NMFOG recognized Manes by saying that “The Lea County Clerk inherited an office that showed little or no interest in making records public.  He has made accessibility of public records in Lea County one of his top priorities.  He directed his office to provide an index of all Lea County records (marriage, probates, oil & gas, deeds, mortgages, ie.,) online for the public.  While record images are not available at this time, the index allows the public to identify the record they want to request or inspect in a much faster and efficient manner.

Fulfer, in accepting the award, stated, “we never dreamed we would end up in such a deal when we filed the IPRA claim. But I learned a lot from the battle that went on for nearly two years. One, I learned that enforcing the public’s right to know requires persistence. In our case, at first former City Manager Bob Gallagher attempted to defeat IPRA by falsely representing to the court that the city had fully complied and that the Jal Record enforcement action was pure harassment. But in the end the City of Jal admitted that it failed miserably to comply with IPRA and had no excuse for its conduct.  And two, after multiple complaints were filed, where was the Attorney General?  This tells me a lot about NM and the corruption we see in the state.  If it weren’t for newspapers and TV reporting, we would be in a sad state of affairs for sure.  Even though newspapers are struggling with a way forward in the social media world, I can say there is a place for them, even in small town NM.  This William Dixon First Amendment Award honoring government transparency and accountability to the citizens of New Mexico is an honor to receive.”